or, The Bathroom as Enduring Misbehavior Zone 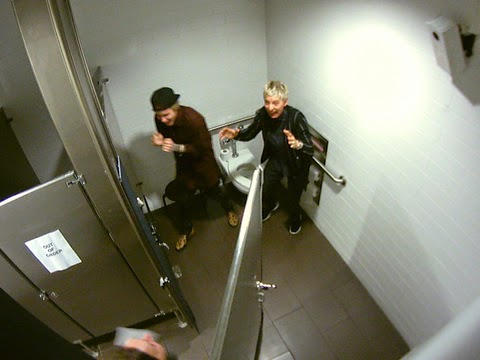 1. Never have I relished the idea of pooping, or even peeing, in a public place—even a private public place like a public restroom. Now, as an adult (ostensibly), I have no real anxiety* about it, but as a kid I had deep misgivings about the stalls and urinals of the realm. For obvious reasons, grade-school restrooms had no door locks, and were designed as communal spaces. (For kids, there is a fine line between communal, tribal, and primal.) The stall dividers didn’t go down to the floor, so the feet of occupants could be seen unless lifted off the floor into evasive position. We were, as a rule, herded to the restrooms en masse at opportune times—between lunch and music, or after recess, or between drinking and pants-wetting. I even recall a trough-style, wall-spanning urinal for an undetermined number of (ab)users. All in all, no shortage of features bent toward the elimination of privacy.

For these reasons and likely others I’ve forgotten, some of my early memories revolve around strategic avoidance of school bathrooms. Well, of actually having to use them for relief of bladder or bowels. As mentioned, teachers used to corral us all and send us in, but I did not partake unless the need was dire. I know now they were saving themselves the later hassle of little bozos asking, one at a time, asynchronously, “Can I go to the bathroom?”, which would amount to the death of productive class time by a thousand small cuts.

On rare occasion, I would get permission to slip out of class for an excretory necessity, but my main strategy in the early years was 1) Hold it all day, then 2) Take the bus home, then 3) Run the last half mile to the toilet because our bus didn’t go all the way to my house in grades 1-2. This quickly evolved into an evasive maneuver where I could urinate a little sooner if I timed it properly: About six kids were dropped to distribute themselves along the last 3/4 mile of our dead-end road, but there were two hills in the middle of that stretch. I found that I could casually break away from the pack, pretend I was in a rush to watch cartoons, trot ahead, then break into a run once I got over the second hill. All the bigger kids were talking and too cool/empty-bladdered to care what I was up to. If I got ahead by the right amount, there was almost a minute where I was out of sight because they were in the trough between hills. Then I’d drop my bookbag and pee with enough force to hit the barbed wire fence from the paved road. I always felt like I was really keeping a secret, but who knows. If they had me figured out, I’m surprised none of them ever pursued and embarrassed me. Then again, flirting with my sister probably already had higher cache than calling out a small child on his self-imposed bladder challenges.

Why go through so much discomfort? Well, I was a poorly socialized freak. But I also have vague, early-‘80s memories of witnessing these bizarre restroom dignity-removal sessions—all the helplessness of lynchings, with none of the bloody mess. Some other kid would make the mistake of being found on the toilet in his greatest moment of need, and an unsympathetic posse would kick the stall door open, point at the hapless pooper, laugh at his strained face as if it was some sort of uncommon sin he was committing, and then move on to kick the other stall doors open. I don’t think they even looked for feet; they just kicked all the stalls open. Such privacy-busting may have happened only once, or many times, but I know I saw it, and I lived in fear of it from that day on.

2. Leap forward about 35 years, to 2015. Springfield holds an election that proves, once and for all, that bathroom anxiety still runs the show, still trumps rationality, even in our politics and public life.

Proposition 1 was framed such that those voting NO (myself included) were opposing a citywide repeal of an earlier law that banned discrimination against LGBT people in business, housing, etc. Those voting YES were supporting the repeal, supposedly to protect the religious beliefs of those business owners and landlords who don’t want to hire or house queers, or whatever you like to call them. This is just one episode in a widespread revival to reassert religious freedom over the rights of others, even though we’ve been through this before and made clear in this country that one’s religious beliefs, while protected, don’t really trump the civil rights of other people. In general, you can think whatever you like, but your notions shall not trump the material well-being of others: If you believe hot-dogs are intolerable, you may forswear them, but you may not forbid others to eat hot dogs, nor take jobs or shelter away from eaters of hot dogs.

Springfield’s Bible-belty geography made this cultural showdown all the more zesty. A local megachurch or two got involved, adding dollars and pulpits to the fight. No surprise— normal Culture Wars material. But both sides got revved up pretty hot, and then came the classic/weird/predictable/nonsensical fearmonger tactic that probably decided the race (YES votes won by less than 1% in the final tally). Billboards appeared, asserting, basically, that cross-dressing perverts and gay creeps couldn’t wait to totally diddle your children in public restrooms.

This is brilliant politics, because no one wants their kids molested in bathrooms. Ask anybody with kids. And the second you bring up the idea, the human mind races ahead to the grossest assumptions about the horrible people who might corner children in the slightly stinky corners of our bathroom anxieties. And racing ahead to the grimy urinal underbelly of human anxiety keeps one from asking, Is this fear realistic?

Well, sure. Anything can happen in a bathroom. I’ve seen Jimmy Barnes lay a brown paper towel over a sink drain to make a blinking “fish-eye” of the escaping water. I’ve had wet paperwad fights with Chris DeLozier in a bathroom, have seen graffiti in Sharpie, ballpoint pen, and poop. I’ve heard of high-school students having consensual sex in bathrooms. I watched as Doug Ackerman called under a stall divider, “Hey, what’s that on the floor?” and then pissed on the shoes of that person. I even saw a drawing of a fabulous sasquatch-like creature called “Dick-Tit,” as well as many phone numbers attached to mysterious, illicit promises (Unfortunately, no phone number was provided for Dick-Tit). The stuff people have gotten away with in bathrooms is pretty nutty, and gross, and sundry, and sometimes bad.

Somewhere, I’m sure, a child has been molested in a public restroom. But I don’t know of any, and if it happened, it was likely done by a non-LGBT molester who was using the gender-appropriate facility. Actually, all the molestations I have ever heard of were committed by the victims’ family members, or clergy, or family friends, probably in totally private places where nobody can just dodge in for a piss or a nose-blow. In our most famous local case, a trusted, career-long school employee abducted his victim in broad daylight, took her to a private residence, and finished her off after unspeakable acts, without ever using the other gender’s bathroom.

Ironically, the same source of anxiety—that anyone could barge in on you at any time—serves as a sort of barrier to extreme deviant behavior, just as it prevents real comfort. Extra ironically, some of the people who supported the YES vote are the same social conservatives who pump the ostensibly libertarian idea that conceal-and-carry gun-toting will reduce crime because criminals are scared you might whip it out on them. Death by lightning is probably more common than being a real-life gun hero, as is accidental gun discharge. But until we have security guards who frisk all who enter bathrooms, who is supposed to enforce any of this anyway? Who knows what some people are toting around in their underwear? Did we learn nothing from SNL’s “Pat,” or The Crying Game, or Jerry Springer? And I doubt anyone will propose that restrooms be filled with cameras to catch people sneaking a ding-dong into the wrong room. So, the whole thing falls apart, until you realize that it was all for shock, to stoke the outrage of the people most likely to ride a wave of fear to the polls.

Public restrooms may be the ideal laboratory for true libertarianism: get in there, do your business, stay out of mine, and it should all work out fine. Here in America, we should be steered to the toilet by pragmatism, not politics. Or maybe I should say, “Just because American politics belong in the toilet doesn’t mean they should come in there with us.”


*Of course, I still have some anxiety on the laughable level. A life-long problem for many, and one that still affects me on occasion, is “Fraidy Pee,” a term I borrow from Josh Trotter. It is of course that hesitation to pee when one finds oneself next to a stranger in a bathroom. It’s a universal enough problem that Trotter and a friend of his had worked out, in graduate school at the University of Florida (as a pastime, not as an academic project), a quiz on which urinal/stall you will choose, depending on which ones are open at the time. While not as impressive or influential, their predictions for human behavior were in the vein of Game Theory, and of similar reliability. Basically all of the rules were reliant on human susceptibility to Fraidy Pee.

Posted by Chad Woody at 9:52 PM No comments: 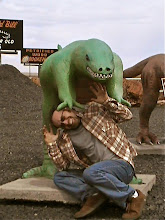